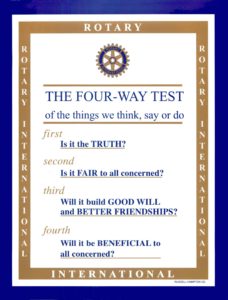 The Four-Way Test of the things we think, say or do is a code of conduct used by Rotarians worldwide as a evaluator for relationships. The test applies to any aspect of life. It was written by Herbert J. Taylor from Chicago, Illinois, and later adopted by Rotary International, the global organization of Rotary service clubs.

In the early 1930s, Herbert J. Taylor set out to revamp the Club Aluminum Products distribution company. His plan started with changing the moral tone of the company. He explained:

The first job was to set policies for the company that would reflect the high ethics and morals God would want in any business. If the people who worked for Club Aluminum were to think right, I knew they would do right. What we needed was a simple, easily remembered guide to right conduct – a sort of ethical yardstick- which all of us in the company could memorize and apply to what we thought, said and did.

I searched through many books for the answer to our need, but the right phrases eluded me, so I did what I often do when I have a problem I can’t answer myself: I turn to the One who has all the answers. I leaned over my desk, rested my head in my hands and prayed. After a few moments, I looked up and reached for a white paper card. Then I wrote down the twenty-four words that had come to me:

I called it “The Four-Way Test” of the things we think, say or do.

In the 1940s, Taylor was an international director of Rotary. He offered the Four Way Test to the organization, and it was adopted. The twenty-four test remains an integral part of the Rotary character throughout the world. The test has been publicized worldwide and used in many languages to encourage good personal and business practices. In the 1940s, Taylor gave Rotary International the right to use the test, and in 1954, he gave them the copyright.